The demands of daily life can be super taxing on your body. That’s why is pays to take care of it. With a little help from Massage Envy, we'll keep your body running smoothly. So you can run that half marathon or that full day of meetings.
Customized experiences
Personalize your sessions with services & products
Highly trained employees
Trained to meet industry-leading standards
Curated product lines
Complement your services and home care
Massage Envy Services
Massage
Stretch
Facials
Not all Massage Envy franchised locations offer facials. Contact your nearest location to confirm service options.
Offers & Updates

Keep your body (and your wallet) feeling good

FREE $20 Promo Card when you purchase $100 in gift cards*
Give the gift of ME time and get a little something back! *𝐎𝐟𝐟𝐞𝐫 𝐚𝐯𝐚𝐢𝐥𝐚𝐛𝐥𝐞 𝐨𝐧𝐥𝐲 𝐢𝐧-𝐥𝐨𝐜𝐚𝐭𝐢𝐨𝐧 𝐭𝐡𝐫𝐨𝐮𝐠𝐡 𝟐/𝟏𝟒/𝟐𝟑. Offer not available online. Promotional card must be used between 𝟐/𝟏𝟓/𝟐𝟑 and 𝟖/𝟏𝟓/𝟐𝟑. Promotional card may NOT be used for monthly payments under Membership/Wellness Agreements, gratuities, or to purchase gift cards. OTHER TERMS AND CONDITIONS APPLY TO PROMOTIONAL CARDS AND THIS OFFER.

Join Now & Get a New Member Starter Kit!
The vouchers are a great way to get to know ME! Sign up for a new 12-month membership by 3/31/23 and get promotional vouchers for one FREE upgrade and 3 FREE enhancements! Terms and conditions apply.

Whole-body benefits, a happier you

Routine massage can help with that

Need to find the perfect place for customized, affordable, and convenient massages, stretch, and facials? Look no further than Massage Envy - Arlington Highlands franchised location. Professional massage or skin care services are performed by highly qualified therapists and estheticians who care about helping you look and feel your best. At Massage Envy - Arlington Highlands franchised location, we make it our mission to help you take care of you.
Benefits of routine massage & skin care
Massage therapy can relax your muscles to help relieve common stress, boost overall energy, or refresh your mental and emotional outlook. Routine stretch can help increase mobility, flexibility and help improve performance. Professional skin care helps expose the skin to beneficial nutrients and improve your skin’s appearance, so you’ll look and feel more refreshed.

We’re open 7 days a week with late weeknight and weekend hours. Make regular massage, stretch, and skin care part of your self-care routine. Take the next step and book an appointment at your local Massage Envy - Arlington Highlands franchised location. 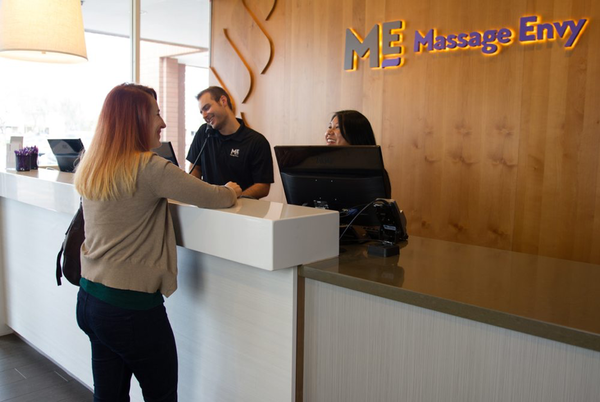 Come grow your career at the best place to work, hands down

If you enjoy knowing that you’re making a difference in people’s lives every day, Arlington Highlands would love to talk to you! Join a supportive community that cares for you as much as you care for your clients.
See local openings
All Massage Envy locations are independently owned and operated franchises. At each Massage Envy location, the franchisee is the sole employer for all positions and is not acting as an agent for the franchisor.
Towns served
Arlington, Grand Prairie, Euless, Hurst, Bedford, Mansfield
Languages spoken
Email this location